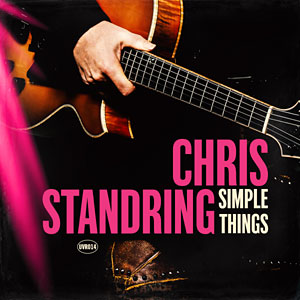 Order the complete Chris Standring download set - (1989-2021). Everything released thus far including bonus tracks.
Order Complete Works here for $120. (Does not include Simple Things yet)

Sometimes it takes a potentially life altering event to make you stop and re-evaluate what is truly important to you. In March 2021, guitarist, composer, and arranger CHRIS STANDRING found himself in the emergency room after experiencing chest pains. Although there was some history of heart disease in his immediate family, he never dreamed that he was himself a candidate for a heart attack. He was just 60 years old, kept trim, ate well, exercised, and never smoked. But he was lucky. He come through it with flying colors and a new appreciation for the simple things that make life worth living.

On his newest release, SIMPLE THINGS, Standring reflects on his recent experience and his new and intimate awareness of the fragility of life. Standring relates, “We have all heard cliches like ‘who knows what tomorrow may bring’ and ‘don't forget to stop and smell the roses,’ but we usually don’t take those old aphorisms to heart. To suddenly come face to face with my own mortality made me think about what is really important to me and how I want to live out my third act. Ultimately the answer came down to a just few basic things - spending time with loved ones, being present in the moment, and doing things with joy. Indeed, the theme of this album is joy, positivity, hope, and, because I'm a sucker for a beautiful melody, a little sadness as well.”

Standring is no stranger to funk, and several compositions on the album were heavily influenced by Prince and Bootsy Collins. Standring explains, “I’m a big fan of Prince, who learned about funk studying the music of people like Bootsy Collins. I wrote the opening track, “Shadow of Doubt,” after hearing a particular bass line by Prince that I really liked and wondered what I could do with something similar. I also saw a YouTube video of Bootsy explaining his basic funk formula. The bass line he demonstrated is so funky that it inspired me to write something of my own. Of course, I had to thank him, which I did on “Thank You Bootsy.” “Face to Face” is another song that was influenced by Prince and Bootsy.”

Standring originally wrote “Change the World” for another artist, but he decided to keep the song for himself because it fit his style so well. He released this tune as a single, which reached number 1 on Billboard, (March 2022). “A Thousand Words” is a darker tune that Standring wrote for an old friend who suffered from mental illness and recently ended her own life. Standring composed “Ain't Nothin' But A Thing” specifically to play in live shows. It features Rodney Lee on organ.

“The Gist of You” has a romantic yet funky, half-time feel. Standring built “No Two Ways About It” on a two-chord groove that he imbues with an infectious, toe-tapping feel. “Too Close for Comfort” refers to his health scare last year. Standring often uses the phrase “Don't Get Me Started,” so he wrote a song with that title. The track features Gary Meek on tenor sax. Standring closes the album with “And the Show Goes On,” a mellow track with a lovely melody. As Standring says, “With all the world has been through the last couple of years – me included - the title says it all.”