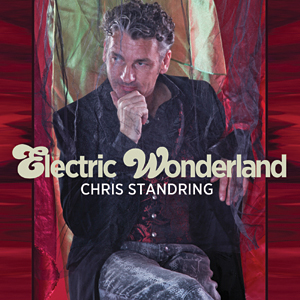 The success of Chris Standring’s groundbreaking 2010 CD Blue Bolero, which topped several year-end lists and produced a No. 1 single, made it a tough act for the guitarist to follow. But Standring has managed quite nicely with Electric Wonderland (March 20, 2012, Ultimate Vibe Recordings), a 10-song CD of original songs that fuses elements of Blue Bolero’s orchestral touches with a deft jazz-pop touch that’s been a hallmark of Standring’s stellar career. “I feel like it’s an extension of Blue Bolero, but a bit more playful and upbeat,” says Standring. “And it also came out much dreamier. I’m playing electric guitar, so I wanted to merge the two when naming the CD.” On Electric Wonderland, Standring’s longtime fans, as well as guitar aficionados, may recognize that he’s doing two new things here. The first is, in keeping with the CD’s title, he’s traded his archtop jazz guitar—which imparts a much more acoustic sound—for a Fender Stratocaster, whose strings and solid-body infuses his music with a more expressive sound.